Trump Ran as a Renegade. Now He’s Trying to Keep Them at Bay.

Instead of elevating insurgent conservatives like Chris McDaniel, a Senate candidate in Mississippi, President Trump has effectively shut off their oxygen by endorsing incumbents.

IUKA, Miss. — When Chris McDaniel first ran for Senate four years ago, his campaign became a cause for disaffected and restless Republicans across the country. Activists waving “Don’t Tread on Me” flags flooded Mississippi. Tea Party-aligned groups spent millions supporting him. Donald J. Trump — who was still a year away from announcing his presidential campaign — took notice and tweeted his endorsement: “He is strong, he is smart & he wants things to change in Washington.”

Mr. McDaniel, a state senator and a lawyer, received more votes than any other candidate in that Republican primary, but eventually lost in a runoff to the incumbent, Thad Cochran. But now as Mr. McDaniel embarks on another run for Senate, his campaign contributions are a fraction of what they were in 2014. On a good night, a few dozen people show up to hear him speak. And President Trump is so far keeping his distance from the race.

Mr. McDaniel’s faded political fortunes point up one of the more unforeseen effects of Mr. Trump’s leadership of the Republican Party. Instead of elevating the renegade, insurgent conservatives who have vowed to challenge party leaders in Washington — candidates who are politically and temperamentally cut from the same cloth as the president — Mr. Trump has effectively shut off the oxygen to the noisiest and most fractious wing of his party.

He has endorsed almost every incumbent Republican senator, making it much more difficult for challengers like Mr. McDaniel to wage the kind of primary fights that have sown division inside the party for most of the last decade. In Alabama, Nevada and West Virginia, Mr. Trump has actively worked against candidates that had strong support from grass-roots conservatives.

And while the president has publicly carped at Speaker Paul D. Ryan and Senator Mitch McConnell, the majority leader — while also privately badmouthing them as unreliable and weak — he has maintained a partnership of mutual convenience with these frequent targets of the right’s ire.

Mr. Trump’s repositioning has led some self-styled conservative agitators to acknowledge that their bomb-throwing, anti-establishment playbook is in need of refinement.

“People are starting to realize that the anti-establishment thing is kind of a luxury we can’t afford right now,” said Stephen K. Bannon, the president’s former chief strategist who six months ago said it was his objective to see Mr. McConnell removed as the Senate Republican leader.

That effort has been put on hold. And Mr. Bannon’s rebellion has considerably smaller ambitions than it did six months ago, when he was trying to recruit challengers to every Republican incumbent senator up for re-election this year, with the exception of Ted Cruz of Texas.

Of those Mr. Bannon worked most closely with, just two are still running: Mr. McDaniel and Kelli Ward in Arizona, who is competing in a three-way primary for the seat that opened up after Senator Jeff Flake announced his retirement. The candidate Mr. Bannon backed most conspicuously, Roy S. Moore of Alabama, lost in December after multiple women accused Mr. Moore of sexual misconduct.

As Mr. McDaniel campaigned in Mississippi last month, the challenge of hitting the right note with voters was evident. If he talked too much about how Washington has failed, he might leave the impression he was criticizing Mr. Trump — a third rail with Republican voters in deeply red states. Attacking Mr. McConnell was useful, but only to a point. So he tried a softer, more self-reflective approach.

“We’re thankful for Donald Trump. We’re thankful to have him in the White House. But he can’t do this by himself,” Mr. McDaniel told a room of about 30 people at an American Legion post in Iuka, a town of about 3,000 in the northeast corner where Mississippi borders Tennessee and Alabama.

Send him to the Senate, Mr. McDaniel went on, and he would do his best to be a vehicle for the will of the people of Mississippi. “I’m just a guy with a message,” he said, “a flawed individual; a sinner saved by grace.”

This is not the campaign Mr. McDaniel thought he would be running. Last fall he was the standout candidate in Mr. Bannon’s class of Republican rogues. The party establishment was spooked, having just lost two incumbents to retirement, Mr. Flake and Senator Bob Corker of Tennessee.

But Mr. Trump thwarted Mr. McDaniel’s would-be mutiny before it could get off the ground. He endorsed Senator Roger Wicker, the man Mr. McDaniel hoped to replace and had spent months attacking as halfheartedly committed to the president’s programs.

Seeing Mr. Wicker as a much stronger opponent with the president’s backing, Mr. McDaniel switched races after Mississippi’s other senator, Mr. Cochran, resigned because of poor health. Now, in a special election being held in November, he is running against Senator Cindy Hyde-Smith, who was appointed in March to fill Mr. Cochran’s seat. Establishment Republicans in Washington have tried to convince Mr. Trump to endorse her, though he is wary of intervening in some state-level races and has held off so far.

In other cases, the president’s endorsements have defied his reputation as a political outsider who has little interest in going along to get along.

In Nevada, he pressured Danny Tarkanian, the Senate candidate preferred by Mr. Bannon and many conservative activists, to run for a House seat instead — despite the fact that the incumbent, Senator Dean Heller, had enraged Mr. Trump and the party’s right flank by waffling on a vote to repeal the Affordable Care Act.

In Utah, Mr. Trump made a once unthinkable concession and endorsed Mitt Romney, a pillar of the Republican establishment whom he once attacked as a “fool” who was too “awkward and goofy” to win the White House.

If these moves seemed off-brand for Mr. Trump, Republican voters didn’t seem to mind. They have appeared willing to follow his lead, party strategists and candidates said, much as they have on issues that once drove the Republican agenda like fiscal responsibility and the debt, which Mr. Trump has largely ignored.

“There are a lot of Republicans that don’t care — a lot more than I’ve ever seen before, because President Trump has signed off,” Mr. Tarkanian said, referring to the anti-deficit and spending campaigns that animated Tea Party-styled candidates like him. “If anybody questions who controls the Republican Party, or who Republican primary voters support,” he added, “they’re not out talking to them. They support Trump.”

Mr. Trump’s maneuvers have largely worked. Mr. Tarkanian eventually dropped his challenge to Mr. Heller. And Mr. Trump’s backing of Senators Deb Fischer in Nebraska and John Barrasso in Wyoming appeared to head off any serious challenges from the right before they could get off the ground. (Ms. Fischer won her primary last week with nearly 76 percent of the vote; Mr. Barrasso is running unopposed in the Wyoming primary, after Erik Prince, the founder of Blackwater, considered and ultimately chose not to challenge him.)

Then, this month in West Virginia, Mr. Trump intervened at the last minute to encourage voters to oppose Don Blankenship, a coal executive recently released from prison who tried to pull off a cruder version of the president’s punch-down, no-apologies style of political combat. Mr. Blankenship came in a distant third in the Republican Senate primary.

When Mr. McDaniel ran four years ago, his lane was much clearer. His opponent, Mr. Cochran, was seeking his seventh term, making him an easy target for Mr. McDaniel’s appeal that it was time to “pass the torch of liberty to a new generation.” He could make a clearer case that he was the true conservative who would fight the kind of pork barrel spending that made Mr. Cochran a legend. His complaints that “millions in this country feel like strangers in this land” sounded fresher in a pre-Trump Republican Party. 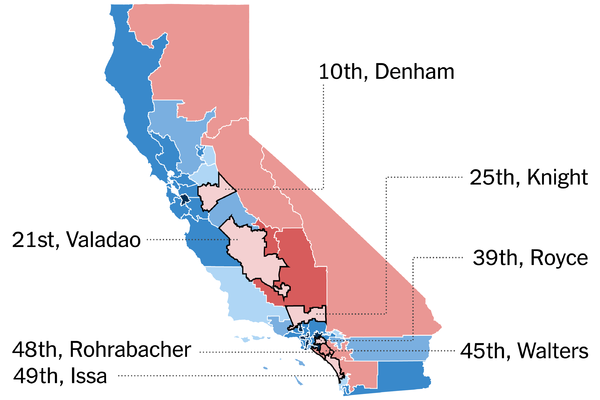 Seven Republican Districts in California Favored Clinton. Can Democrats Flip Them in November?

These are the districts Democrats think they have the best chance to flip. But it remains an open question what the presidential result may mean for Democrats in the midterms.

Mr. McDaniel said he expected more attacks from fellow Republicans this time. “My party finds conservatives; they target us; they spend untold amounts of money against us. Then they say, ‘See, he’s unelectable,’” he said in an interview before he boarded a camper that would carry him across the state for his speech in Iuka. It’s the same vehicle he used in his first Senate campaign, with the same three-foot-high decal of the Constitution slapped on the side. New stickers that say “2018” cover up where it used to say “2014.” It breaks down more frequently now.

There is no primary to fill Mr. Cochran’s seat. It’s candidates from both major parties competing directly against each other: Ms. Hyde-Smith and Mr. McDaniel, and the Democrats Mike Espy and Tobey Bartee. If none receive a majority on Nov. 6, the top two will compete again three weeks later.

The United States Chamber of Commerce, a longtime ally of Mr. McConnell and the Republican leadership on Capitol Hill, has already committed $750,000 to pay for ads supporting Ms. Hyde-Smith and attacking Mr. McDaniel. A new Mississippi-based “super PAC” run by the nephews of Haley Barbour, the former governor and Republican National Committee chairman, is waiting in the wings for the right time to strike at Mr. McDaniel, likely closer to the election.

On the Democratic side, Mr. Espy, a former congressman and Agriculture secretary, is hoping to push Mr. McDaniel into a runoff.

Mr. McDaniel said he has been puzzled by some of Mr. Trump’s political choices, especially the Romney nod. “Mitt Romney could not have been more establishment, more hateful toward Donald Trump. And he endorsed him. How do you look at that?” he asked.

On one level he said he understands Mr. Trump’s approach. “He’s raged against the machine and won. And now he’s pretending to work within the machine,” he said. “I think it’s probably necessary under the circumstances to play some of those games.”

But as for how Mr. Trump’s realignment has affected him, Mr. McDaniel said, “It’s changed the whole ballgame.”

OK druggist note says jail is 'like being in hell'

Serbia Seeks to Block Execution of Citizen in U.S.