Privacy Complaints Mount Over Phone Searches at U.S. Border Since 2011

A traveler removing her laptop from her bag for scanning in May at Kennedy International Airport in New York.

WASHINGTON — They spoke of being humiliated and shaken. They described being “made to feel like a criminal.” And they maintained that their rights had been violated.

Grievances over lost privacy run through a trove of roughly 250 complaints by people whose laptops and phones were searched without a warrant as they crossed the United States border. Filed with the Department of Homeland Security since 2011, mostly during the Obama administration, these stories add a personal dimension to a growing debate over rights, security and technology.

In January 2016, a Virginia woman wrote of experiencing a “blatant abuse of privacy” after she and her 19-year-old son were pulled aside for extra screening at Newark Liberty International Airport upon returning from Spain.

“They took his laptop and cellphone and proceeded to go through both after getting the passwords from him,” she wrote in her complaint, adding that her phone was taken and browsed through “without my consent,” as well. While the officers were cordial, she said, “the line between security screening and blatant search and seizure without cause or explaining is not.”

American courts have long permitted government agents who protect the borders to search, without a warrant or any specific basis for suspicion, the possessions carried by people as they cross. But smartphones and other personal electronics contain vastly more private information than suitcases.

The American Civil Liberties Union and the Electronic Frontier Foundation have filed a lawsuit in Boston arguing that a warrant should be required to search such devices at the border. Last week, the Trump administration asked a judge to dismiss the case.

The lawsuit comes amid a surge in agents looking through — and sometimes copying data from — cellphones and laptops. Midway through fiscal year 2017, Customs and Border Protection was on pace to search 30,000 travelers’ electronics — more than tripling the annual number by that agency since 2015, when it searched 8,503 people’s devices.

The complaints were submitted to the Department of Homeland Security’s Traveler Redress Inquiry Program. In many cases, the people list a set of grievances in addition to feeling their privacy was violated, like being detained for hours and missing connecting flights. The Knight First Amendment Institute at Columbia University obtained the filed complaints under the Freedom of Information Act and provided them to The New York Times.

A lawyer at the institute, Carrie DeCell, called the practice “digital strip-searches.”

“Border agents shouldn’t be sifting through a traveler’s text messages, emails, photographs and personal files without probable cause,” she said.

A Customs and Border Protection spokesman, citing the pending litigation, declined to comment or answer questions, such as how frequently electronics searches uncover something that warrants action. But other current and former agency officials said that the total number of searches remains low considering there are nearly 400 million border crossings annually.

Stevan E. Bunnell, the top lawyer at the Department of Homeland Security from 2013 to 2017, said agencies should be judicious about how often they use their search powers. But he also cited scenarios in which it could be important to scrutinize the pictures or contacts on a traveler’s phone, even though agents would not be able to meet a probable cause standard if warrants were required. Such scenarios could include travel patterns or an intelligence tip raising the possibility that the traveler has links to terrorism.

Aristides Jiménez, who was a deputy special agent in charge of the Homeland Security Investigations office in San Antonio before retiring this year, said such searches have led to the arrests of drug and human smugglers as well as child pornographers.

“Believe me, it’s not something that ICE agents want to abuse,” he said, referring to Immigration and Customs Enforcement, another homeland security agency that conducts border searches. “Because we know in this environment, if you abuse the authority, you’ll lose it.”

The government redacted names from the complaints, but many identified themselves as Muslims or people who were not of European descent, and many appeared to be men. A Kuwaiti man, for instance, wrote that when his plane landed in the United States in September 2016, border agents came on board and asked him to unlock his laptop and phone.

“I told them my religion prohibits that other men see my wife without the hijab (the head cover) and in some pics she was partially nude,” he wrote, including the parenthetical explanation. But he was scared that they would “do something bad” to him and gave the agents the passwords to his devices.

A physician born in India and who lived in Tennessee wrote in 2012 of driving from Canada into the United States with his wife and their two school-age children, who are both American citizens, and being detained for five hours, during which agents coerced them into providing the passwords to their cellphones and iPads and looked through their emails and Facebook accounts. At one point, after asking how long it would take, he was put in handcuffs, he said.

“We were quite shaken and disturbed by the whole experience, especially as we are law abiding and tax paying residents, with no criminal records,” he wrote.

The complaints showed that people are particularly disturbed when agents not only look through their devices in front of them, but conduct a “forensic search,” in which the agents copy their data for more intrusive examination, such as trying to recover deleted files. 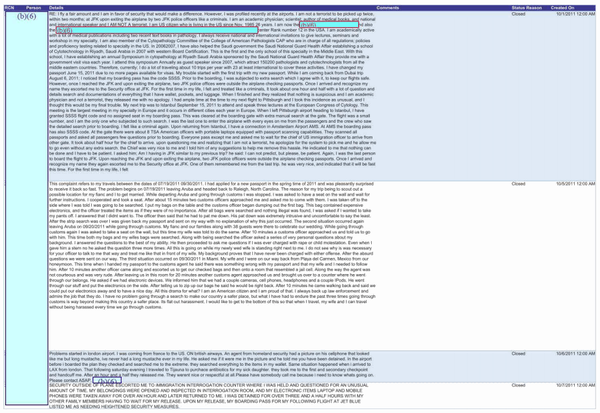 Read Complaints About Warrantless Searches of Electronic Devices at the U.S. Border

The Department of Homeland Security, in response to a Freedom of Information Act request, has released several hundred complaints filed since 2011 by people whose phones, laptops or other electronic devices were searched without a warrant at the United States border as they entered the country.

In April 2012, a man said his laptop and external hard drive were seized when he arrived at Denver International Airport on a visa. A receipt later showed that eight people had handled them, he wrote in slightly broken English.

“I feel it is very unappropriate way of sharing my personal files with 8 different people!” the man wrote. “At least they could let me know, what is happening with my files. And when those files will be deleted?”

Homeland security’s policy directive for electronics searches shows that if agents determine that copied data has investigative value, they can add it to a case file; if they decide it is irrelevant, they must destroy it within 21 days. Copied data may also be shared with other agencies, like the F.B.I., for handling under their own procedures.

The law surrounding electronics searches is in flux.

In 2013, the appeals court in San Francisco ruled that border agents in the states it oversees — including California, Washington and Arizona — must have “reasonable suspicion” to conduct forensic searches of devices. But it left intact an agent’s ability to conduct cursory inspections without any basis for suspicion, and the new limit did not extend to agents elsewhere.

One particular focus is attorney-client privileged materials, which border agents may scrutinize after consulting a government lawyer. In April, the American Bar Association asked homeland security to require a “subpoena based on probable suspicion or a warrant based on probable cause” for that step. The association also established a task force that is examining broader issues raised by warrantless border searches of electronics.

Also in the spring, several congressional lawmakers filed a bill to require warrants to search the devices of Americans at the border.

Although it appears unlikely to be enacted in the present Congress, the bill is designed to reduce feelings of violated rights like those described in a June 2015 complaint.

The man described himself as an American citizen, a Muslim, and an education professor in Texas. He described being “treated like a terrorist” when he, his wife and their toddler daughter arrived at San Francisco International Airport after visiting relatives in Iran.

They were detained for nearly four hours while agents searched “my phone, my university owned laptop, and all electronic devices,” he wrote, adding, “My family and I feel belittled, ashamed, humiliated and disgraced.”